A new title from the author of the Sliding Sideways suspense series will be released for Kindle on Jan. 1.

Spiders in a Dark Web: A novel of romantic suspense 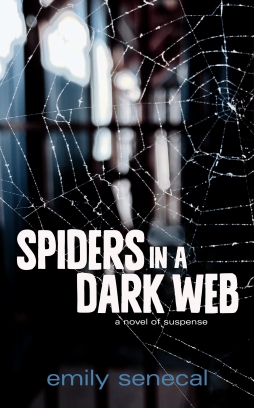 Just beyond my sight was a vast menacing darkness, a web of greed and lies and violence. It touched me, had touched my parents, though we never knew it existed. And now that I’d seen it, I couldn’t ever go back to unseeing. I was a part of it now. Connected by a dozen different strands, held fast by its shadowy influence.

Her cousin Marianne is the only family Lola Bright has left. They’ve grown apart over the years, but Lola had no idea how far—not until Marianne shows up at her LA apartment and tells her to run.

Hiding out in a vintage camper near Half Moon Bay, Lola finds herself isolated, trapped by unknown threats, and inexplicably drawn to a man surrounded by his own troublesome mysteries. She decides to risk exposure to learn the truth about her cousin—and finds out much more than she ever wanted to know.

Following a trail that takes her from New York to Arizona and back to California, from the arms of a lover to a jail on Rikers Island to a dive bar in Tucson, Lola becomes enmeshed in a dark and dangerous mystery that will leave no part of her life unchanged.

Praise from readers for the series:

“The never predictable plot keeps you reading until done. Mystery lovers will enjoy this one. Emily Senecal is a gifted writer who draws you to her every book.”

“Emily Senecal’s writing gives readers compelling, well-constructed plots that bring us deep into the lives of complex characters, and her narratives are accentuated by artistic imagery and a vivid sense of setting. The result is highly readable fiction that stays with the reader, writing one could classify as literary fiction just as easily as mystery.” –Zack O’Neill, University of Houston Writing Fellow, former editor-in-chief of Yemassee Literary Journal

The Element of Truth, a novel of suspense

The First Time We Met, a novel