Just this week I went back to look at my first novel, which I hadn’t touched for a few years. This isn’t the first book in my series, Strangers on This Road, but a sentimental story called Since I Met You about a girl and a movie star. I like parts of it a lot. I feel like the writing could be stronger in many places, and it isn’t all that original a plot. But the characters are interesting, they interact well, and I enjoyed writing it and rewriting it so much that it will always have a special place in my affections.

Before Since I Met You, which is a full-length novel of 86,000 words, the longest story I’d written was a short novella, also a romance. I’d always dreamed of writing an actual book, so the fact that it existed, that I created it, was insanely exciting. 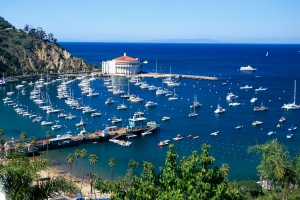 Avalon Harbor, one of my absolute favorite places!

The first draft of Since I Met You was written in about two weeks, but it took another two years to get to the MS that exists now. I pretty sure I’m the only person that’s read it as-is. A few family members read the original version, and I got mixed reviews—all very fair. The writing was good, the settings good, the story not so great. “Self-conscious” was one of the comments that stuck with me—in a positive way. I think it improved with revisions, but I may never feel it’s as strong as my later books. I’ve been reading through it, and can see a lot of flaws as well as some of the potential realized in the Sliding Sideways series. The story even starts at a wedding in Avalon, where I also set all of Strangers.

Without that first attempt at a novel, I wouldn’t have written Strangers or any of my other books. I wouldn’t have released my expectations of writing a “serious” novel and instead come to understand that my strengths and inspiration were to be found in escapist suspense stories. And that was a huge gift, to recognize what I really wanted out of writing. Not to be famous or lauded, but to write entertaining books that people can enjoy and get lost in. Now, eight novels into the series, I can see how I’ve grown as a writer and a person, and feel very grateful for where that journey began.

Just for fun, here’s what the book jacket of Since I Met You might say.

College junior Eva Meade has the chance of a lifetime: to be a bridesmaid at a celebrity wedding in Avalon, where her movie star crush, heart-throb Matthew Kean, is the best man. But rather than feeling excited, shy, studious Eva is horrified to have to interact with such glamorous people. It doesn’t go as badly as she fears, but no one could call it a rousing success. She’s barely recovered from this experience when a serious injury changes everything she thought she knew, forcing her to face her darkest fears as she’s thrown into adulthood and starts to discover who she wants to be. As she celebrates her long-awaited college graduation in Paris, Eva must free herself from the last remnant of her recovery—an ex-boyfriend named Eric—while finding love in a wholly unexpected place.

Hmm. I’ll probably stick to writing suspense novels, but even if my first book never goes anywhere, it led me here, and that’s definitely reason enough to be proud of it.

The Element of Truth, a novel of suspense
The First Time We Met, a novel